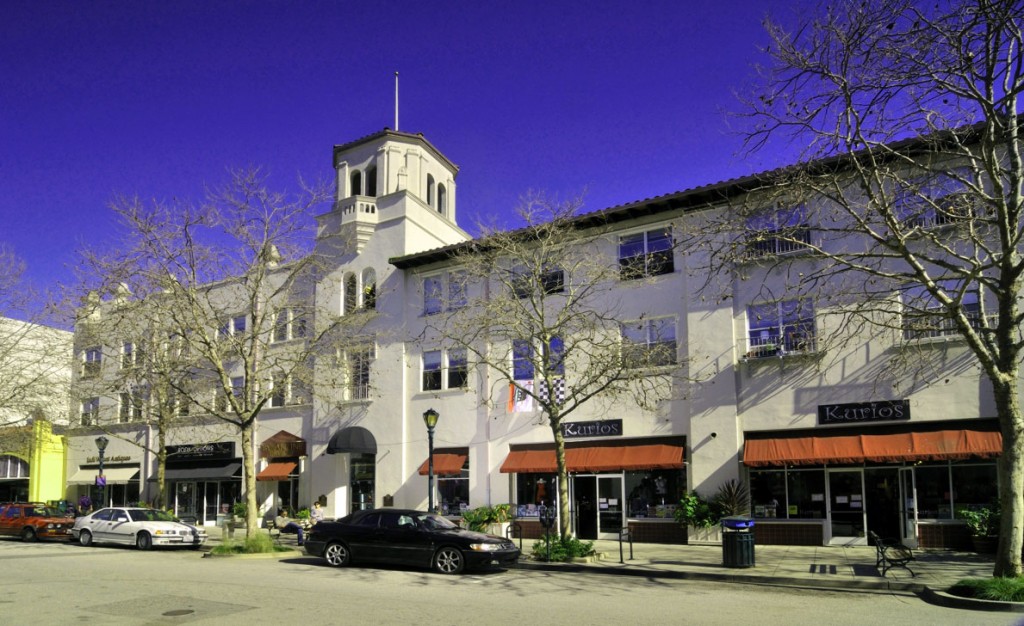 The original St. George Hotel rose out of the ashes of an 1894 fire, then perished in a 1990 fire. During its life, this luxury hotel was a showplace of art and culture, a civic and community center, and the salvation of downtown Santa Cruz’s tourist industry in the 1920s.

The current building retains some chief features and massing of the original landmark, as an example of rescuing local heritage through “historic redevelopment.”

In the 1880s, Santa Cruz was a favorite vacation spot of San Francisco millionaire Anson P. Hotaling. He built what became the “McHugh & Bianchi Building” at Pacific Avenue and Mission Street in 1886 and opened the “Hotaling House” at the St. George site. In 1893, he built what became the boardwalk’s first plunge.

That year, he replaced the wooden Hotaling House with a three-story red brick Italianate hotel. It burned in the Great Fire of 1894, which wiped out Front Street’s Chinatown, leveled most of the block bounded by Pacific, Front and Cooper streets, and gutted the courthouse.

As Hotaling rebuilt his hotel, he bought adjacent properties and built a three-story Front Street wing, and a two-story addition to the north. To emphasize his hotel’s fireproof construction, Hotaling named it the “Hotel St. George” after the knight who defeated the fire-breathing dragon.

The lobby’s side doors led to Tanner’s Soda Fountain, the St. George Billard Hall, and the Bandbox Barbershop, which included a bathhouse in the barbershop basement. The lobby’s newsstand included a telegraph service, the fax machine of its day for travelers who needed to stay in touch with the outside world. The town’s first hydraulic elevator graced the lobby and attracted people from all over for rides.

The hotel was considered a marvel of engineering, for the way natural light illuminated all floors, eliminating the need for artificial light during the day. Yet the solarium halls never became unbearably hot, as high ceilings and ventilation provided natural air conditioning. During World War II, many windows and skylights were painted for blackout requirements, a condition never reversed, producing unnecessary gloom.

The Hotalings had their own elegant suite for their visits, and friends who stayed here, such as William Randolph Hearst, pronounced it “the finest hotel between San Francisco and Monterey.” It was as much a community center, housing the public library upstairs and the Superior Court chambers in its Front Street hall, until the new courthouse was constructed.

Afterward, this hall became the Wisteria Dining Room, bedecked with heroic- sized murals by a German artist depicting dancing nymphs. This was one of Santa Cruz’s rare art nouveau rooms, capturing the bawdy elegance of San Francisco’s “Champagne Days.” The central courtyard was glassed in to create the Palm Court Tea Room, a plant-filled conservatory regarded as the hotel’s finest space.

In 1911, Fred Swanton added the Casa Del Rey Hotel to his boardwalk development, followed in 1920 by the La Bahia Hotel, shifting the convention and tourist market away from downtown.

To recapture that business, Frederick Hotaling (who took over after his father’s death), purchased two buildings north of the St. George for expansion, making it the largest hotel in the county. A unifying Mission Revival facade was added in 1922, with the hotel renamed the “St. George Mission Inn.”

The strategy worked. Then in 1930, the St. George, Palomar and Casa Del Rey were united under one management, and Santa Cruz became the top Northern California convention city outside San Francisco.

Following World War I, the lobby served a greater civic function, with side rooms housing the Red Cross, the junior chamber of commerce, the state Board of Equalization, and the hotel’s library. And during Swanton’s years as mayor (1927-1933), the band balcony became his mayoral office, where he presided over the lobby like a king in his court.

In 1925, Anson’s widow, son Frederick, and daughter were eating breakfast at their San Francisco home when they noticed the milk smelled funny. They had it analyzed and discovered it had been poisoned by a relative who wanted to kill all who stood in his way of inheriting Anson’s fortune. The St. George was sold soon after.

The replacement design has retained many of its historic exterior features, and incorporated the famous garden court skylight into the new structure. The ironwork balconies were salvaged from the old landwork, and reused on the new building.

The project currently houses 122 SRO Units, along with two 2-bedroom apartments and 60,000 SF of ground floor retail.  Barry Swenson Builder acted as developer and general contractor on this project with design from Thatcher & Thompson.

This entry was posted in Amenities. Bookmark the permalink.